My name is Simon and I was 27 years old when I broke up with the girl I’d been engaged to. We’d been together for seven years and I thought we’d have a family together. As far back as I can remember in my childhood I’d wanted a little brother and then as I got older I knew I wanted children and to be honest that was actually more important to me than marriage, but as it happened, it didn’t work out in the end and we split up. Soon after, I started seeing another girl, but this time it was more casual. We went out drinking at the weekends and just having fun, she was on the pill and we didn’t really take our relationship too seriously . . . but then she became pregnant.

It was a complete shock, I was in and out of work, she was on a low wage and we hadn’t thought about having children together, but I decided to do what I felt, at the time was the ‘honourable’ thing: I told her I’d support whatever decision she made about the pregnancy and I wouldn’t pressure her either way. She told me it should be a joint decision, not just hers, so in the end we made the decision together. We decided to have an abortion.

I come from a Christian background, my mum’s a Catholic and I considered myself Christian too though I didn’t take it too seriously at the time, but nobody tried to stop us or advised us against doing this thing. Let me make it clear, I blame no-one except myself, but looking back, how I wish with all my heart that someone had said something, that someone had seemed bothered about the decision we made so very lightly . . . it seemed the easiest thing in the world to do, we simply went ahead and completely bought into what I now see, ten years later, was a huge and dreadful lie. You just make an appointment, go to the clinic, and quietly and calmly, with no fuss, get rid of your child. So we did, and it seemed so simple. 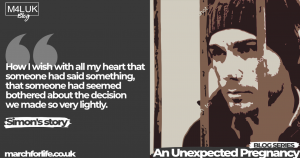 I stood outside waiting for her as she came walking down the drive after the procedure. I looked at her and it suddenly struck me that she had somehow changed. There was a look in her eyes, of loss, of death. As we pulled away in the car, then stopped down the road for her to open her door and vomit, I didn’t feel any relief about the situation, but I began to feel a growing sense of unease with what we’d done.

On the surface, it didn’t seem to us or to those around us that anything had really changed but what I remember from the next 3 years was how I tried to bury what I now recognise as real grief. Grief that no one, especially me, would acknowledge. I attempted to carry on as before with my girlfriend whilst trying to deal with feelings of guilt by going to speak with one or two Catholic priests. They did their best to help and advise me, but I just wasn’t ready to confront the truth. I merely wanted to forget and feel better about myself. I ended up staying with my girlfriend for about three more years after the abortion. Our lives became rather chaotic, we were drinking and I was taking drugs. I still went to church but even that was sometimes under the influence of drugs and alcohol; then something happened that changed everything. A person who I considered a friend, committed a terrible murder and I was implicated in the crime with some other people. Not in the murder itself, but police thought I’d provided information to my friend and I ended up with a six-month prison sentence.

It seemed completely unreal. I knew I was innocent of this crime so I’d never expected to end up in prison. On about the sixth day of the incarceration I was really struggling to the point that I felt mentally tortured. When I was climbing the stairs back up to my cell with a tray of food, it seemed to me that the tray carried the weight of the world upon it. I entered my cell and I heard the door bang shut behind me and the guard turned the key noisily in the door. That’s when it hit me, and I sank to my knees, sobbing. I realized I was just wasting my life with the crazy choices I was making; all the drinking and drugs but worst of all, despite knowing I was innocent of the crime I’d been charged with, I felt like I deserved to be jailed as a murderer because of the abortion I was involved with. I felt such a burden of guilt that it made me think I could never be forgiven . . . yet as these thoughts began to cross my mind, I suddenly had a most tremendous spiritual experience which was so powerful that I knew God’s love, mercy and forgiveness were available to me. From that day I started to deal with what had happened.

‘I suddenly had a most tremendous spiritual experience which was so powerful that I knew God’s love, mercy and forgiveness were available to me.’

This was the start of a long, hard road for me, to acceptance of the abortion and to truly grieve for the child I had lost. I started to see how it had affected me. Day by day, step by step, I began to deal with the hurt, the grief and the pain of knowing I had lost my child. Sometimes things would hit me powerfully, such as when I dreamt I was walking with a little boy who I felt sure afterwards was the son I had aborted, even though I had never known the sex of my child. Then, when I was at a Catholic festival and I walked up to a stall run by the prolife charity ‘Life’, they had some models of babies at different stages of gestation. One was a perfect model of a child in the womb aged 2 -3 months. I knew immediately, as I looked at the tiny but perfectly formed baby, that my child would have looked almost exactly the same when we ended the pregnancy and again I was filled with tremendous sadness.

Moments like this continue to haunt me and I’m sure they will for some years to come . . . it has been a long road to finding peace and freedom and I’m still on my journey. I have spent the last ten years of my life coming to terms with that decision we made, and suffering terribly because of it. I’ve been on retreats to places such as ‘Rachel’s Vineyard’ which have helped me come to terms with what has happened. I think it is only my Faith that has got me through it and is still helping me deal with it.

I thought at the time that as the baby was growing in my girlfriend’s body and it was aborted from her that it couldn’t possibly, seriously affect me. I was wrong – so wrong! 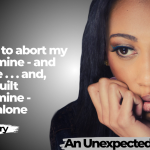 My name is Elizabeth and this story still makes me feel emotional as I tell it.Uncategorized 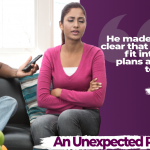 ‘He made it absolutely clear that a baby did not fit into his current plans and that I had to get rid of it.’ Danielle’s StoryUncategorized