Following on from our conversations with Dr Eileen Reilly (obstetrician/gynaecologist) and midwife Julia Gibbons, March for Life UK spoke to Dr Dermot Kearney to hear what he had to say about DIY/home abortions. Dr Dermot is a consultant cardiologist in Newcastle, he’s also president of the Catholic Medical Association.

At the beginning of our discussion Dr Dermot spoke to us about the Abortion Reversal Pill (APR) and how it relates to home abortions. He explained how APR can help block the action of the first set of abortion tablets (medical abortions involve taking two sets of tablets to complete the procedure) providing that the second set hasn’t yet been taken and the APR is administered quickly.

Dr Dermot reminded us that APR is not guaranteed to succeed but explained ‘we know this can work in 50-70% of cases depending on how quickly APR is obtained and the stage of gestation.’ He went on to say that there is no risk to the health of either the mother or the developing foetus so it can be a lifeline to an abortion-minded woman who has a change of mind part way through a medical abortion procedure.

‘We’ve been doing this in the UK since the end of April 2020’ Dr Dermot told Isabel Vaughan-Spruce at March for Life UK, ‘That’s the reason we’ve set it up – purely in response to a cry for help from women.’ This seems to indicate that many women having medical abortions are uncertain about their decisions considering they change their minds so quickly. This is particularly worrying when we look at how easy abortions are to obtain through the telephone abortion ‘service’. Dr Dermot related how ‘One of the girls (he’d been helping obtain APR) said that she was very grateful for the help received (from him) but she can’t believe it’s so easy for a woman to obtain these pills. She just made a telephone call.’

Dr Dermot told us that when he helped set up the APR service in the UK he was largely following the example of the US who ‘had been providing APR since 2012 in a very organised fashion. They’ve had over 2000 babies saved’ said Dr Dermot although in the UK ‘very few people know about this service yet we’ve had approximately 100 women looking for help in less than 8 months . . . We’re getting basically 4 calls a week . . . By the end of 12 months we’ll probably have about 200 requests for help – this is for a service nobody knows about.’ Dr Dermot thought this may well be related to the fact that women are now obtaining abortion pills so easily.

‘Even people who are pro-choice’, said Dr Dermot ‘if they’re truly pro-choice they would support us in this because the woman has made a decision but now she’s made a different decision and if it’s her choice, it’s her choice!’ but sadly he told us that when a woman phones up for a home abortion she would not be told about APR. ‘I think it goes against the ideology that abortion is a good thing’ Dr Dermot explained, the abortion supporters would think ‘how could a woman possibly change her mind?’

Dr Dermot then went on to express his other apprehensions regarding DIY abortions ‘I’m very concerned about the risk to minors. It would be very easy for an abuser, a trafficker, to surreptitiously obtain drugs by telephone call and make sure his victim is forced to undergo an abortion.’ As others have suggested there could be confusion over a pregnant woman’s gestational stage since no scan is required or whether the person requesting pills is in actual fact pregnant at all. ‘It opens the door for abuse’ Dr Dermot reiterated.

Dr Dermot related further aspects which concerned him ‘The lack of supervision is worrying. This is reintroducing the whole concept of backstreet abortions.’ With a DIY abortion the term DIY refers to the whole process. A pregnant woman/girl has to effectively determine her own gestational stage since she isn’t given a scan and the clinician on the phone is relying on the accurate memory of the pregnant woman’s last menstrual period. The woman then administers her own tablets, disposes of the remains of her own dead foetus and copes with her own grief or trauma.

‘You’re talking about big profit margins for the abortion providers I would suspect.’ Said Dr Dermot ‘They still get paid the same amount whether they see them face to face or over the phone.’ He continued ‘The Abortion Act of 1967, bad as it was, leading to the death of millions of unborn babies in this country, at least there were some alleged safeguards . . . Abortion is bad in all circumstances but to try to advance it further without safeguards is another disregard for the health of the mother.’

To find out more about Abortion Pill Reversal go to abortionpillreversal.com 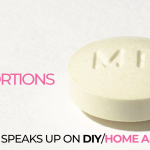 A Midwife Speaks up on DIY/Home AbortionsUncategorized 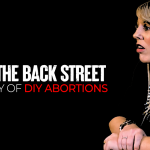 Back to the Back Street – The Reality of DIY AbortionsUncategorized