It’s father’s day and a great time to be with your dad, but also an opportunity to celebrate fatherhood. Male and female, God created them. The complementarity of a mother and father is the basic building block of the family and society. Contrary to post-modern thought, fathers cannot be replaced, yes there are heroic single parents and families, but the absence of a dad is always a loss, although one that God can heal and redeem.

So how did we get to this point in our culture, where in the UK, two primary schools worth of children a day are aborted? Much of this has to do with the commercialisation of sex. Sex has become a recreational activity, just like any other recreation, but where there is sex, there will alwaysbe babies.

With the commercialisation of sex, men can avoid the responsibility of fatherhood and this contributes to a ‘perpetual adolescence.’ Men live for their Xbox, live in constant narrative of comedy, who take little interest in studying the deeper questions of life and objectify women as a means of their recreation.

As the saying goes “It takes adults to make babies, but it takes babies to make adults.”

For our grandfather’s generation, there was less money around and men were forced to get serious and to grow up quick. As is well documented, 75% of all suicides in the UK are men. Men today have a decline in happiness despite moresexual availability. Academic, Mary Eberstadt, likens this phenomena to obesity. She observes a ‘sexual obesity’ in the West, a gorging on pornography which has indisputable harms. Young people exposed to pornography are more likely to have multiple sexual partners, use alcohol or drugs with sexual encounters and higher sexual permissiveness.

We have a generation of men who have in their hearts the potential for nobility, courage, integrity and self-sacrifice– we only have to look at our armed forces as an example of this. However, our hyper sexualised, money driven culture keeps men in the smoke screen of smut, practical atheism and shallow comedy.

What is the solution? It starts with you and me. Being an example of integrity and honesty within our sphere of influence. So when a conversation with the lads turns macho, ask them how their kids are doing, or how their father-in-law is after his back operation. In front of your mates, compliment women, on their appearance when they are dressed modestly. Be considerate of your friends, think of their birthday and cheer them up if things are hard.

In this way, we counter the adolescent mentality and love them with Christ’s love. We can only do this through a life of prayer, pondering Jesus like Mary pondered him in her heart (Lk 2:19). We become like the company we keep. If you keep company with Jesus, you influence your friends – no question.

Today it is father’s day for allthe men out there, whether you have children or not, because we are all responsible to the children of our nation and all have a role to play in the protection of the unborn. Let us honour women and inspire a generation of bold men of humility who can fully step into the sacred role of fatherhood. 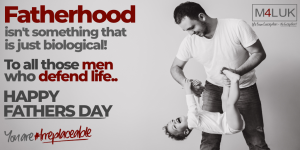 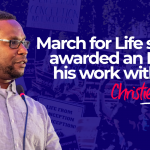 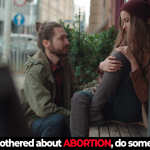 If you’re that bothered about ABORTION, do something about it!Uncategorized