My name is Fatima. This is my story:

I grew up in a strict Muslim family. Although I lived in the UK and went to a mainstream school I didn’t really have a childhood as such. I wasn’t allowed to go out and meet friends like other girls my age were, instead, I was expected to stay at home and perform chores. On the last day of term at my school, when I was just 16, I was standing outside the school gates saying goodbye to old friends. A fellow pupil came up to me, he was a boy who had been in my class since I started, he gave me a hug and wished me well for the future. One of my relations happened to witness this and told my family that I had hugged a boy. That evening my parents sat me down to tell me how displeased they were and how they had decided it was best to take me to Pakistan and have me marry there. I was horrified but really had no choice but to comply. They took me to Pakistan and I was married there, I wanted to wait before beginning this relationship but my family made it clear to me that if I did not become pregnant by this man then I would not be returning to the UK. Again I felt I had no choice but to comply and I eventually gave birth to a daughter.

We returned to the UK and later I had my second child. It was then my husband’s attitude became very difficult because I had given him two girls. We continued to live together and had more children but I eventually found the strength to leave and we separated.

After a while, I met a new man and we began a relationship. Myself and my children were living with my mother (my father was no longer alive) so I kept this relationship secret as I knew my mother would disapprove. I became pregnant but sadly I had a miscarriage. It was particularly hard as I had to keep my grieving secret. In the end, my mum found out about the situation, she was horrified when I became pregnant again. I was told I had to choose between my baby and my family. Day and night I was continually going over things in my head, I didn’t know how to cope with the stress which was overwhelming. I wanted my baby and knew it had a heartbeat but my mum and sister took me to Marie Stopes abortion centre where they had booked me an appointment. I couldn’t stop crying but the nurse just told me she had booked me in tomorrow for an abortion.

I came back the next day and was told I would be having abortion pills. I told the nurse that I needed to clear my head and that I felt under pressure so I went to stand outside in tears. It was there I met a man praying. He was so kind and helpful, he gave me a leaflet which explained about my pregnancy and he gave me a number I could ring for help. This helped give me the confidence to refuse the abortion pills and go home but still, there was pressure put on me. My family continued to push me to abort, I had no one who would just be my friend, I was so alone. The father of my baby told my family to stop putting pressure on me and that was when my mum packed all my belongings into bags and told me to leave. She said if I kept the baby I was dead to her. In the chaos of leaving so quickly I lost the leaflet the man had given me so I couldn’t call for help.

My partner took me to live with him but things weren’t easy. In April I gave birth to my baby girl. When I held her I began to cry – just looking at her made me feel happy for the first time in ages.

Things were still hard and I wished I could have some help as I was struggling. I was still very stressed and felt alone. One day when I was at home by myself there was a knock on my door. It was a lady doing market research. I invited her in and we had a chat. I don’t know why but when she remarked on my baby I found myself telling her the story of how my baby had nearly been aborted. When I spoke about the man who had given me a leaflet outside the abortion centre, the market research lady jumped up with excitement. ‘I’m part of the team that does that’ she told me, and she then phoned her friend who organised the team and I told her my story down the phone. We arranged to meet up and she has helped support me and my baby.

I feel proud of myself now for continuing my pregnancy even though I didn’t know how things would end. I have become friends with the lady who organises the team outside Marie Stopes. I said to her that even though I lost the leaflet God found a way to bring us back together. I could never have lived with myself if I’d had an abortion. When I look at my beautiful little girl I know it was all worth it. 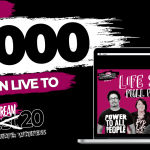 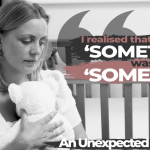 I realised that the missing something, was somebody.Uncategorized