Every abortion is wrong, whether it happens at 6 days, 6 weeks or 6 months. Every abortion ends the life of a child and can have a huge impact psychologically on the parents, especially the mother. Home abortions however (also known as pills-by-post abortions or DIY abortions) are particularly alarming because women and, debatably, some medical professionals too, are seemingly unaware of what a serious procedure this is not only in terms of moral gravity but from a healthcare perspective to the mother.

Many individuals and organisations have spoken or written of their concerns regarding these types of abortion where a woman has no face-to-face consultation – so no chance to privately talk about coercion/abuse etc, no scan, no contact with a doctor, and has to self-manage her own abortion in the isolation of her own home before disposing of her own dead child.

Recently some information has come to light which demonstrates further how dangerous these abortions are for women and why these abortions should never, ever have been legalised. New statistics obtained through Freedom of Information requests (F.O.I) by Percuity.co.uk from NHS trusts in England highlight that 1 in 17 women (5.9%) having a home abortion have been treated in hospital for complications arising from their medical abortion.

Bear in mind that last year 72,059 women had this type of abortion at home, that means on average over 12 women every day were going to hospital for treatment. These complications include incomplete abortion, retained foetal parts, haemorrhage and infection. Bear in mind also that these figures are likely to be underreported since some women may have stated that they were having a natural miscarriage rather than admitting to having an abortion.

Worse still is the fact that women are having home abortions without being made aware of the risks they are taking. BPAS (The British Pregnancy Advisory Service) one of the UK’s leading abortion providers, have a video entitled ‘informed consent to treatment’ explaining the risks of a medical abortion. In their video they claim that less than 1 in 100 women may have complications and describe this as ‘low risk’ and ‘a very safe way to end a pregnancy’ – this is a far cry from the figures revealed by the recent F.O.I. requests.

One of the reasons often put forward for legalising abortion is that abortion will happen anyway and it is better to have a ‘safe legal abortion’ than a ‘backstreet abortion’. These recently released figures prompt us to question further how ‘healthcare of women’ can possibly be an excuse for legalizing abortion.

In a recently published article Dr Calum Miller delves further into this discussion and reveals that claims of dangerous backstreet abortions are very misleading. He exposes how the Royal College of Obstetricians and Gynaecologists (RCOG) tweeted a claim from the Telegraph that 12,000 women in Malawi die each year from unsafe abortions and yet the latest estimate for total maternal deaths annually in Malawi is 1,150 and even that figure needs some scrutiny. In Dr Calum’s recently published paper for the British Medical Journal he explores how figures are misrepresented as claims are made that large amounts of women are dying from illegal abortions yet the figures used to support this claim are that of both induced and spontaneous (miscarriage) abortion combined as well as including legal and illegal abortions without distinguishing between the two.

In this Daily Mail article we read of a mother from Blackpool who died from sepsis 4 weeks after her medical abortion despite having reached out to her GP surgery and explained her symptoms of nausea, sweating and abdominal pain. Her death is tragic but is it really unavoidable? Have even doctors and other healthcare professionals bought into the lie that medical abortion is so inconsequential in terms of women’s health that there are no real risks with having this procedure at home? Or is the truth more sinister? Are we so desperate to make the facts fit our ideology that we will bend them anyway we like? Are we now too afraid to acknowledge that abortion always carries serious risks because the consequence of that acknowledgement would be to admit we have failed women. 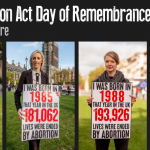 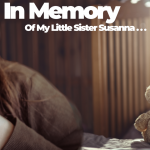 In Memory Of My Little Sister Susanna . . .Uncategorized