My parents have been pro-life for as long as I can remember, but it was never something forced or especially expressed in the house. As I heard conversations about abortion at school, the derogatory expressions used by my peers and the complacency of my teachers about this issue, got me thinking. I was confused as to why there was a general consensus that abortion was a ‘right’, something to protect and feel proud of. I started to realise that being anti-abortion, was taboo.

I remember going home one day, sitting down at the kitchen table, a puzzled glaze over my eyes as I fired questions at my father, all about what it was to be pro-life. I recall him going into depth about what abortion was and why many people believe in its legality. I was stunned. Stunned to silence. I could not believe that my teachers stood idly by, listening to 14-year-old children, rage about the reproductive rights they must have. From that point onwards, I knew that if no one else would stand up for what was right, logical and ethical, then I would. At that time, emotion did not drive me. I did not fully comprehend the nature of abortion and the concept of a child dying in the womb. For me, I rode on the illogical and unethical reality, that was abortion. I spent near to an hour, every evening watching Ben Shapiro’s myth busts and his impeccable speed and articulation. I went back to school, equipped.

The facts, figures, science and stories, I had enough under my belt to face my peers head on. I remember a time during an RE lesson, 2014, we were learning about different institutions’ positions on abortion. A group of three boys, started defending abortion, saying how the unborn baby is not sentient, and ‘leeches’ off the mother. I was appalled. Not only because of their disregard for life, but also because, right in front of me, I saw boys who were being misled, who didn’t understand what their role as men really should be. My fighting drive shifted from mere logic and ethics to emotion and heartbreak. I realised that both women and men are being fooled. This was not just a fight for rights, this was a general cop out of male responsibility, something learned from the example of their peers or even their fathers. After trying to explain that women do not merely have abortions for a power trip, but because of their lack of support, I left the classroom devastated. And that is the feeling you need to be a fighter.

You all need a reason, a cause, a horrifying revelation. For me, this abandonment of women by the fathers of their children, the lying to men about their responsibilities, had to stop. If no one was going to reveal the truth to my generation, and help women to realise that abortion is not empowering but devaluing, then I would.

From this moment on, being Pro-life was a verb. I actively sought out every opportunity I could to help people hear about truth. When I entered the University of Southampton, I started a pro-life society on my own. I began myth busting sessions, attending training weekends, youth conferences, pro-life tours and whatever I could get my hands on. Starting a society was a wonderful opportunity to have, but it failed. The reason that it no longer exists is because when I left Southampton, I never had a team. There was no one I could pass the society on to. Southampton University has the largest Student Union in the country, with the largest amount of societies in the UK. Imagine what a dream it is to represent the unborn within that institution. However, not everyone sees pro-life as a verb, many people keep it as a noun because it takes time, it’s scary, it’s just not for them. If you find your horrifying revelation, you will have time, nothing will be too scary, and you will learn to overcome anything.

Throughout history, no genocide ended through people labelling themselves a believer. Genocides ended through activism, bravery, and determination. Do you not think abortion has gone on for long enough?

We are the next generation; we have the power to change the world. Do not allow societies to fail. Do not sit back and see your friends sink to the lies of abortion. One conversation at a time changes one heart at a time. Always remember that. 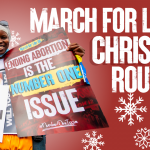 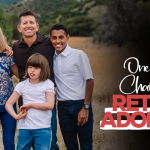 One Mum’s Challenge to ‘Rethink Adoption’Uncategorized