Today we heard the news that we’ve been waiting for – Roe v Wade has been overturned! For those of us who recognise that the legalisation of abortion was a grave disservice to women, as well of course as being the death knell for vast numbers of preborn children, this is something to be greatly celebrated.

Roe v Wade, which happened in 1973, legalised abortion through all three trimesters. Many people are now aware that Norma McCorvey, better known as Jane Roe, (the plaintiff or claimant in the landmark 1973 case) never actually had an abortion but the law that bore her name opened the floodgates to millions of US babies having their lives legally terminated and to millions of US women being sold the lie that abortion was the answer to their difficult pregnancy.

Whilst at present abortions will still be happening in many states in America, we know that the overturning of Roe v Wade greatly restricts and limits where abortions can be performed and how far someone may have to travel to obtain one – this is a huge step nearer an abortion free America.

We are sometimes told that illegalising abortion will just push it underground but in reality this isn’t what the facts or figures show. I remember talking to a woman who’d had multiple abortions. I asked her if there was anything that could have prevented her from making the decisions she did. After a pause she told me ‘Yes, there’s one thing . . . the law’. She said ‘If abortion had been illegal I would never have had an abortion and my children would still be here with me today’.

The law offers a last protection for any children who aren’t yet recognised as such by their parents, it offers a last protection for any women who are tempted to think that abortion is somehow a solution to their problems. The law also prevents men from shirking their responsibilities of fatherhood and pushes societies and governments to confront the inadequacies there are in social care for those who are pregnant or struggling with children.

This landmark ruling in the US was announced today but the lead up to the momentous event is a long one. After abortion was legalised in 1973 there was a sharp rise in abortion figures, reaching a peak in the 1980s/early 1990s yet over recent decades there has been a steady decline (although pills obtained outside clinical settings are not included in reported statistics). Figures for abortions obtained in physician offices, hospitals, abortion clinics and other clinics have all decreased and this poses an important question for those of us in the UK: Why?

Clearly there are many factors to consider with a question of this magnitude but I think a strong contender is that Americans have made abortion a talking point both on the streets and in politics. When we talk about something this helps us to think through an issue too and this is key to changing opinion. Law will rarely change if public opinion doesn’t change that’s why campaigning politically, whilst vitally important, can never be a stand-alone method for defeating abortion.

Many people have an opinion on abortion in the UK but it’s questionable whether a comparable amount of the population have really thought the issue through with all the facts, figures and emotional engagement needed to make an informed decision.

At March for Life UK we often talk about the importance of being publicly pro-life. This doesn’t necessarily mean standing in the town centre with a poster, although it most certainly can do. What being publicly pro-life does mean is making our beliefs more than just a label we give ourselves. I sometimes suggest this litmus test – ask yourself the question: ‘If it became illegal tomorrow to be pro-life would there be enough evidence to convict you?’ If the answer is ‘no’, don’t berate yourself but rather think how can you change that? What small step could you make initially to become comfortable with the label pro-life rather than ashamed of it – the more you get involved you will hopefully get to the stage that you aren’t just comfortable with the label but proud of it.

The pro-life position is one of truth, we should be happy to talk about the science of the child in the womb, whose heart is beating from week 3, a fact which can, and should, make abortion supporters squirm. The pro-life position is one of love, we should readily speak up about post abortion trauma and the symptoms of grief that can follow this decision as well as how to find healing and peace no matter how many abortions someone may have had. We don’t need to impose our beliefs on others, the truth, lovingly presented, helps people to see the inconsistencies in their own beliefs.

We all need to ensure we can engage both intellectually and emotionally on this topic since it’s important to convert both minds and hearts. It’s easy to think we have a perfect rational argument for why abortion is wrong but if we aren’t presenting our case in a way that connects with someone’s emotions too then we can sound insensitive or discompassionate.

What Roe v Wade has done is provide a strong talking point for us in the UK let’s use this to our advantage and not shy away from discussing this issue. We don’t want abortion to become illegal as much as we want it to be unthinkable and paradoxically what we need to do for it to become unthinkable is to get people to think about it. As always, this starts with ourself. 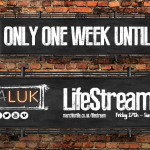 One week to go until LifeStream 22Uncategorized 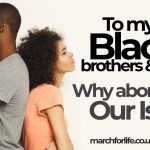 To my Black brothers and sisters – Why abortion is OUR issueUncategorized